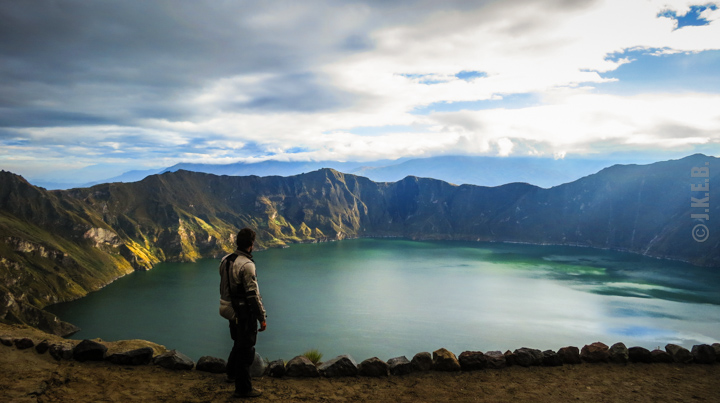 The Panamerican Highway in Ecuador has no resemblance to the part that runs Peru, so it was interesting. It is a mountainous curvy road amidst lush hillsides running at altitudes higher than 2,000 meters for a large part of the route. It was chill and with several rapid alternations between sunshine and heavy overcast. It would be an amazing place to ride a motorcycle if there were not the endless convoy of trucks that spoil the flow and forced us to a snail’s pace.

The scenery was very beautiful and the Andes on the horizon stretched from end to end. It is an impressive landscape but the mountains and highlands of Bolivia and the wild Cordillera of Peru that had preceded threw the beauties of Ecuador’s nature at third place. Thus, we proceeded with few stops until Cuenca. There, from the outset, from the suburbs already, we were enchanted. A city as a jewel. Cobbled streets, white faded mansions and restored old buildings, the roofs and the wall colors, elaborately decorated balconies. Streets full of people, clean streets, quiet roads. All those around the green banks of the river Rio Tomebamba, simply compose a strikingly attractive city.

We liked it so much that we stayed there for a couple of days without having initial plans to do so. We walked endlessly all day long in the city’s streets. We considered Cuenca as being by far the most beautiful city among those that we visited during our journey. We departed from Cuenca on the morning of November 12. The pattern of the route remained the same. Beautiful, green and tropical for the most part of it. We reached the capital of Ecuador, Quito, and stayed there for a week as we had to fix some issues with the motorcycle. So, we plenty of time to spare, we explored the city.

The capital of Ecuador, located at an altitude of 2,850 m., has its contradictions as any big city. It has the expensive suburbs, where neighborhoods, buildings, cars and details of roads make you think that it could be any modern European city. But it also has the slums. And of course it has that beautiful historic center, the old town, where the spirit, history and culture of South America are pounding in every corner. It’s not beautiful or elegant as Cuenca, but it has a unique grandeur because of the cathedrals, the monasteries, the palace of government, the museums and countless buildings with their facades preserved from the 17th century. All of this creates an atmosphere fitting a World Heritage site, as it is designated by UNESCO.

The streets are full. The fruterias are selling fruits unseen before to our eyes. Watermelons here (as in Peru) are the most delicious and juicy that we have ever eaten, by far. The heladerias never stop serving ice cream. In Mercado central (central market) and the mercado of Santa Clara the smells of food pull us in. The meriendas (lunch) are served in kiosks. Locros de papa (potato soup with cheese and avocado), truchas (trout) and corvinas (bass) are delicious, cheap but plentiful. We share the same bench with the locals to eat. They share genuine smiles, they say buenas tardes and wish us aproveche (good appetite).

On November 18th we picked up the bike from the repair shop and we continued northeast. We arrived in the small town of Cayambe. At the southern entrance of the city was our goal. There lies the line of the equator. The GPS confirmed our mark. Latitude 0.0.0. We were on the “center of the world”!

The original plan for us, for the journey, was to ride until the equator. From there on, we would turn south. But just 180 kilometers separated us from a country misunderstood for most people. The country of cocaine cartels, this is the first that comes to mind most, Colombia. The temptation to see one more country, even for a short period, prevailed. Columbia was too close for us to ignore. So we continued north !

Without having realized where we were, that we had reached the center of the world after almost two months on the road, we hopped on the motorcycle and went back to the Panamericana. The Imbabura volcano covered by clouds did little to distract our attention. We got to the border. Our  passports were stamped and soon enough without unnecessary bureaucratic procedures we were in Colombia!

Since we never had plans to visit Colombia, we were riding completely without any predetermined routes or destinations. We would decide as we moved on. We visited the small village Las Lajas, where the search for a cheap accommodation turned out to be a little challenge. The next morning we walked to the impressive Santuario de Nuestra Señora de las Lajas. A place of pilgrimage for Colombians.

On a side note, we were told that the Colombians are among the most polite and hospitable people that we would meet. Indeed, what we were experienced from the 1st day of our presence there, was exactly that. Lovely people.

The route to the city of Popayan holds a variety of sights and riding. We reached an altitude of 3,150 meters, then low to an unbearable tropical heat and humidity at 600 meters and then again high at 2,000 m. Twisties, mountains, valleys and canyons, all smothered in green. Very green, as one would expect from a tropical zone. Another thing that piqued our interest, beyond the really beautiful scenery, was the strong presence of the army and police, the men of which more resembled commandos rather than policemen. Armor mundane patrols sprang up suddenly from the bushes at the edge of the roads. There were frequent checkpoints every 5 km in some parts of the Pan American. All of them waved to us kindly and gave us “thumbs up”.

Popayan, especially its center, stroke us with unique beauty so we decided to spent extra time there, at the “white city” of Colombia (seems that every south American country has a white city). Once we continued our trip, we rode towards the coffee zone of Colombia, or “coffee triangle” as it is also known. We reached the tranquil village of Salento, where spending a few days to relax was one thing to do. The other was naturally to visit a coffee farm and watch the whole process of the harvesting of coffee with much interest.

At that point we had to re-assess our whole schedule. Our available time and budget dictated that if we really wanted to see Patagonia, we would now have to turn around. So we did. We crossed the same route in Colombia but this time southbound. Then we entered again Ecuador and after a few hundred kilometers on the panamerican highway we turned to the west, taking the exit to Latacunga. The winding road took us to altitudes in excess of 3,000 meters, and as usual the surrounding landscape of that part of the Andean range was stunning. At the Quilotoa village there is a huge volcanic crater. The caldera of the volcano is located at an altitude of 3,914 meters and has a width of 3 km. It is accessible by foot and it is truly a spectacular sight. We were lucky that the weather was good in the morning of the day we were there, and so we enjoyed the view.

We set course to the southwest region of the country. We left Quilotoa and traversed the western edges of the Ecaudor’s Andes until reaching lowlands near the coast. From a high point at 4,100 m. we could see basins full of clouds forming below us. Following the relief of the lush mountains we pierced the white cover to find ourselves underneath it, surrounded by tropical vegetation in winding canyons. We arrived to the plains. The road was stretching for hours and hours through vast banana plantations.

The following days we just coasted the whole western front of Peru, without much deviation as we had to make time to Chile. The only interesting stop-over was at Arequipa, a city with a beautiful old historical center, where the facades of the buildings have a characteristic ash-like color. There, we celebrated the end of one of the stages of our journey. The following day we would enter Chile and soon we would set foot to Patagonia!

We use cookies to ensure that we give you the best experience on our website and also to show you relevant advertising. If you continue to use this site we will assume that you are happy with it.Ok.Refuse 3rd party non functional cookies.- Read more