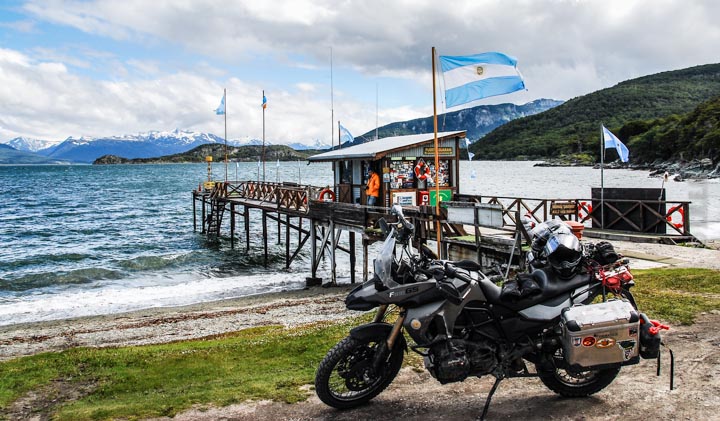 From Punta Arenas leaves a ferry that reaches Porvenir on the island of Tierra Del Fuego after three hours. We chose to do a small loop and head towards the Strait of Magellan where we would pass across on one of the smaller ferries that make the crossing of the Straits. Ruta 3 in Tierra del Fuego is gravel for a large part, but the ride was easy. At Rio Grande We checked in at a hostel that is owned by a very friendly biker, Willie, who prepared for us a tasteful asado.

Our approach to Ushuaia was under rain, hail and freezing temperatures. Through Garibaldi pass it felt like heavy winter, even though we were in the heart of the summer of the southern hemisphere. But this fact does not matter much, cause that place is so close to the Antarctic that is seriously affected by the cold currents and winds of the extreme south. We entered Ushuaia on January 5th, the city that is proclaimed as the southernmost on earth. Our emotions were mixed. Joy and excitement together with a constrained sadness, because we knew that our journey was coming to closure. After about 4.5 months wandering the roads of South America, we were at the “edge of the world” (“fin del mundo“).

Our Argentinian friend Hernan came from Buenos Aires the next day to meet us in Ushuaia. He had grown up in this place and had great sentimental value for him, to being visiting here again after many years on the occasion of meeting with friends & motorcyclists. With him we rode to the National Park Bahia Lapataia, where officially is the end of the road. There terminates the ruta 3, there ends the road trip to the south! We walked through the park and in a moment Hernan stopped us to show us a plant. Its fruit is surrounded by a legend. “Whoever tasted Calafate berry, in the future returns in Patagonia”. As if it was a ritual, we tasted it and wished for the promise of myth to fulfill. Before returning to the city we made a stop at the southernmost post office in the world on the shore of Bahia Ensenada and at the station of the “train to the edge of the world”.

We spent three more days in Ushuaia hanging out with Hernan, preparing asado, drinking beers and strolling around the city, listening to him speak with passion and nostalgia for the place, while I tried again and again to find what I was missing. Whether walking in the port or standing on the edge of the old ski circuit, where was our camping, over the city, looking at the horizon to the Beagle channel beyond which lies the Antarctic, I was searching for a sense of triumph. I expected that our arrival in Ushuaia would awaken unprecedented and intense emotions. Imagine it. Spending over four months on a road trip to a continent far far away to reach “the edge of the world”; but no triumphant emotions arose. Not a shiver. Instead I felt only serenity. An inexplicable internal peace.

I remembered a conversation I had a few days ago, 1600 km north to Chalten, with Eric, a fellow motorcyclist traveler we met there. He had described to us how the arrival to the extremity of South America felt the same to him. The first explanation that we had given, was that after so long on the road and after you’ve seen much more impressive landscapes, one after the other, you stop to be impressed anymore. Moreover, Tierra del Fuego of our modern times is not dressed in a scene of epic adventure movie. It’s just a beautiful place.

We also thought that after a bunch of tests that await every rider in this unique place that South America is, such as in the highlands of the Andes where you are literally breathless, or in the deserts looking in vain for a shade to rest, or battling with deep sand tracks or the muddy mountains of Peru or the tropical heat of Amazonia, the easy scrolling through the gates of Ushuaia has no fancy ceremonial finish.

We concluded that what we are experiencing there in the finish, was that there was no finish. We were ultimately experiencing what is often said, that the destination does not matter and that what matters is the journey, all that lies in between. We had to spend four and a half months on the road in order for this testament to be drawn in our own skin, for good. We now had got the tattoo you’ve always wanted, only that it was an invisible one. We were one with the road and we had to return to it. The edge of the world was not a trophy. It was just one more dot that connected with the rest of them forms the line of our paths, past, present and future.

We left Ushuaia and headed north. We had to cross 3000 kilometers until Buenos Aires. Ruta 3 that runs along the east coast of Argentina is nothing spectacular. For the majority of it, runs through empty vast flat land. The wind of course, is present. After Rio Gallegos and between the 51st and 50th parallel, we encountered the most violent wind ever. It superseded whatever we described on our previous posts. It felt as if we were punched by Mike Tyson without mercy.

There were 3 places that attracted us, along ruta 3. The first one, was the penguin colony at Camarones. We walked there, by the sea amongst those lovely little fellows and we were intrigued by them as much as they were by us. Next was the Peninsula Valdez, even though we can call it a fail. There were no whales to watch, since we were there during the season that they swim to the south. Also, the place was overcrowded, it was vacation time for the Argentinians.

We continued until Azul. We had to pay a visit to a place that is almost legendary now. The Posta del Viajero en Moto. Travellers from all over the world pass from Jorge’s house and spend there a night or more. His garage has its walls signed all over. Everyone leaves his mark, and so did we. Our final stop before the capital, was at the beautiful and tranquil town of San Antonio de Areco, where the family of our friend Hernan have their house. We relaxed there for a couple of days, drinking mate with them. Reluctantly we left. It was time to return home.

After 5 months, our journey had come to an end. The last week was full of preparations for the shipment of our motorcycle back to Greece. We greeted our friends and we said “hasta la proxima”!