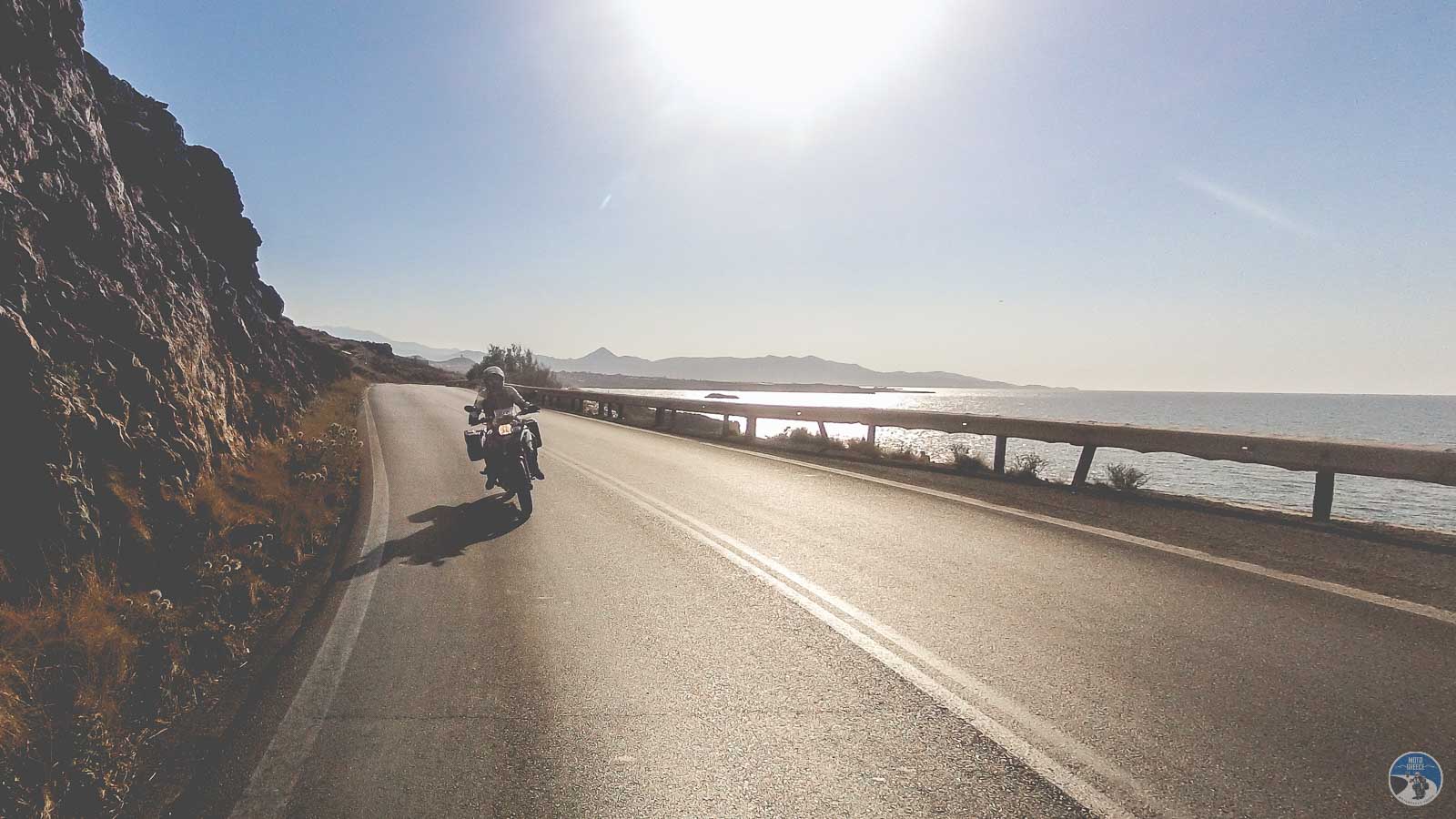 How is riding in Greece, you might ask. If you are considered about what is applied in Greece, or wondering about how things are done in our country, then in this article you may find some useful information. Let’s start.

Which side of the road?

Riding/driving is on the right side of the road. Overtake on the left.

In crossroads & junctions the priority is given to the vehicle coming from the right, unless road signs or traffic lights direct otherwise.

Look for road signs. In many roundabouts there are STOP signs or Give Way signs (Inverted yellow triangle with red outline) for vehicles approaching to enter the roundabout. So the other vehicles that are already inside the roundabout go first. When signs are absent, priority is given to the vehicle coming from right.

Pedestrian crossings (“zebra lines”): officially traffic rules dictate that pedestrians always have priority, like in every other country. However, it is a bad habit of Greek drivers not to stop in zebra lines! So, before you stop, make sure that drivers following you see that you stop in time!

The international 3-color traffic light system is applied in Greece. Some Greek drivers often speed up when they see the yellow light, so be alert! That’s wrong of course and we do not suggest you do the same. When you see a yellow light, brake gradually and check your mirrors! The driver following you may not expect you to stop.

They are mostly bilingual : Greek and English.

The following limits apply, if not otherwise shown by signs:

There are 2 types of speed traps used in Greece. Stationary and mobile (“hand held”).

Hand-held radars are used by patrol officers and there is no warning for them. They monitor and capture from the front (face).

Toll costs for motorcycles range from 1.2 to is 1.5 euros per toll (last update: August 2016). There is no “vignete” system, you pay as you go. In some highways there are multiple tolls along the route and you have to pay in every single one of them. Payment is done at the booth, right before you pass the bar. Sadly, credit cards are not accepted yet.

This is ambiguous. By the book, motorcycles may filter traffic only when all car vehicles are at halt. In real life, filtering is done by all greek motorcyclists no matter what the conditions are and car drivers are used to this, so most often they keep their eyes on their mirrors for motorcycles that are passing by. But, you must keep in mind that in the unfortunate event of a collision during filtering, insurance companies will not cover you and also a court will most probably justify the driver of the car, no matter the conditions of the collision.

They are very common throughout the countryside. Unless you plan on doing some adventure riding over remote mountainous areas AND your motorcycle’s gas tank is small, you need not worry. A motorcycle with a fuel range of 150 kilometers will get you anywhere in Greece. Average price (as of August 2018) is 1.60 euros per liter, for 95 RON unleaded. You may see fluctuations of this price, with lows at 1.59+ and highs at 1.69+ euros/ liter. Higher octane fuel – usually at 98 or 99 RON – is available at most gas stations in cities.

Running a red light or ignoring a stop sign is 700 euros. Not wearing a helmet on a motorbike is a fine of 350 euros. Riding under the influence of alcohol depends on how you score on the breathing analyzer and can be from 200 to 1200 euros. The alcohol limits are equivalent to approximately one glass of beer.

Most of these fines also incur a loss of license for 10 days to 6 months. Fines are not collected on the spot by the police. You will never be asked to pay on the spot. Fines must be paid within 10 days in any local police station or bank (by exhibiting the fine ticket), otherwise legal proceedings will be started.

Motorbikers in Greece do show a fellow comradeship among them. In Greece most motorbikers tend to greet each other while on the road by signaling the headlight, instead of raising the left hand as it is mostly done in other countries.

Motorcycles are very widely used in Greece. So car drivers usually pay attention to us. Of course there will always be those absent-minded people. As always, a rider must ride defensively in order to enjoy the road trip! Motorbiking safety guidelines are the same no matter what country you ride in and our best advice is “ride as if you are invisible”, as if noone sees you and be prepared for the unexpected, always.

There is no official regulation that requires riders in Greece to wear high visibility items.

For visitors to Greece, dial 112, for all sorts of emergencies (similar to 911 in the US).

Other quick dial numbers include: 100 for Police, 199 for Fires, and 166 for ambulance service.

We hope our article answers your questions! But if you have anything else in mind that is not covered here, please don’t hesitate to contact us!